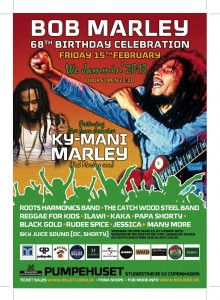 Scroll down this page for link to press photos, Bio and Program.

Listen to Bob Marley scroll page all the way down

To experience a Marley in concert, in honor of Bob’s birthday, is something that has never happen in Denmark and probably never will happen again.

Join Sky Juice Promotions and the countless other Cph. and scandinavian reggae fans for an unforgettable positive evening of music and culture as we continue to honor The King by celebrating his life and music with a birthday celebration called * WE JAMMIN *

Every year in February reggae fans all over the world celebrates The King Of reggae music birthday as a reminder of his work for peace, love and liberty. 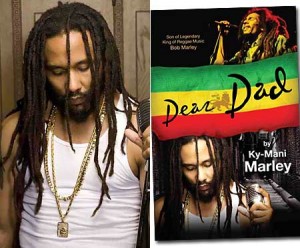 Songs such as “Jamming,” “Waiting in Vain,” “War,” and “One Love/People Get Ready,” has the message of Love, Peace and Social Justice, which has touched, uplifted and gave voice to the day-to-day struggles of so many people around the world, even today. 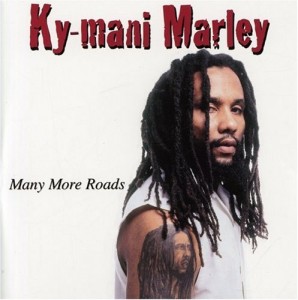 The only child of Anita Bell Davis, Jamaica’s ping pong champion in the 70’s, Ky-Mani was six years-old when his father passed, leaving one memory -the time Bob took him and brother Stephen to visit his Nine Miles birthplace, and Stephen showed Ky-Mani how to work a slingshot. “That’s it,” Ky-Mani says of the recollection that inspired his soul-wrenching “Dear Dad” ’97 debut single,

Workshop on Bob Marley’s life – will take the form of literature on Bob, his music, Marcus Garvey and Rastafari, by Blakk Goldd who will enlighten the public on how Rastafari took Bob Marley and his music to 4 corners of this world. Note the public will be able to obtain literatures and interact during the time the Black Room is open.

– Selectors DC and Shorty will be on hand to interact with the public on the topic of reggae sound system. DJs will be playing low music by the original wailers, Bob Marley, and vintage reggae, with visuals (DVD/video).

20:30 – Seminar by Danish reggae Journalist Henrik Beck will make a detailed demonstration with visuals and speech about reggae music and Bob Marley life. Note the public will be able to interact by asking questions.

21:30 – Catchwood Steel band, a group of youths will play the steel pans with the sounds of the Caribbean

Tribute to Marley by Reggae For Kids.

Reggae For kids live band has been a part of this celebration for some years, and with the keeping of the same tradition there will be a group of youths and kids doing an unplugged Tribute performance.

22:25 – Sky Juice Sound will be spinning Marley on the box, creating a vibes like when he was with us.

After Party at The Black Room in Pumpehuset with Sky Juice Sound, DC and Shorty, pumping sounds of reggae dancehall it a go well nice trust we until you say when.