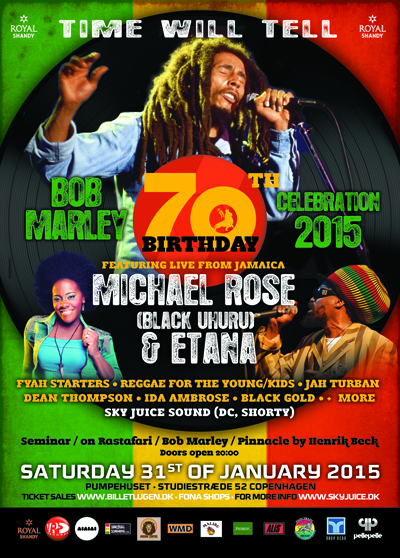 After Party down stairs Ground Stage

Sky Juice Sound – until you say when. 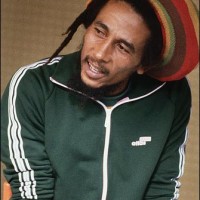 The King Of reggae, would have celebrated his 70th Earthstrong (birthday) Here in Copenhagen Sky Juice Promotions presents this special event ‘ Time Will Tell’ (#TWTBM70) celebrations featuring Marley’s music as a reminder of his work which has the universal message to all of peace, love, unity and liberty.
His many words and sounds always evoked power have remain timeless. Bob’s inspirational repertoire with Wailers band includes ‘war’ which was based on Haile Selassie I of Ethiopia speech to the United Nations. One Love/People Get Ready, waiting in vain and Exodus have touched, uplifted and given a voice to many people around the world facing life as day-to-day struggle.

Undoubtedly as a reggae music icon, Marley led a fascinating life which will be covered in a work shop. The #TWTBM70event will also include a seminar on RasTafari culture and reggae music. Reggae for Kids live band will share a Tribute to Marley and Word sound contribution will be provided by Spinning Marley sounds.

Hold the date in your diaries people, join Sky Juice Promotions and the countless other reggae fans in Copenhagen and Scandinavia for an unforgettable positive evening of music and culture as we continue to honor The King by celebrating his life through his music. It’s said that for every situation you find in life there’s a Bob Marley song that will provide an answer. 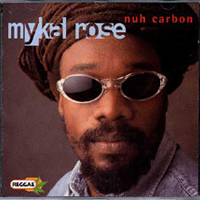 success throughout his career spanning more than a quarter of a century.
Michael Rose has been recording and performing his brand of militant, hardcore Jamaican music to the delight of reggae fans around the world.er, even as different Jamaican musical styles have phased in and out of popularity.
Perhaps the highest profile recognition came in 1984, when Michael Rose and the other Black Uhuru members (Duckie Simpson, Puma Jones, Sly Dunbar, and Robbie Shakespeare) won reggae’s first Grammy award for the album, Anthem.
But the story doesn’t begin with Black Uhuru. In 1976, Michael Rose was already a seasoned performer, having honed his skills by performing on Jamaica’s hotel circuit

Etana – The Strong One – once in a great while, the world is afforded with a powerful, soulful and unique voice of the 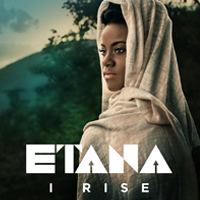 people. The ever-so-talented songstress Etana has emerged as this entity, representing one of Reggae music’s newest faces. Boasting a flawless soul-soaked voice, in just a few years, Etana has captivated and inspired legions of diehard fans. In addition to wooing listeners with her rich honey-laced vocals, Etana also proudly dons the hat of songwriter. The singer has boldly struck a chord with the masses, winning the hearts of the people one song at a time. Etana’s craft of developing Reggae music masterpieces spans beyond just a means of entertainment.

Jah Turban
Has Just released the well received Mama Africa album, a album of truths and rights, He grew up in Spanish Town, 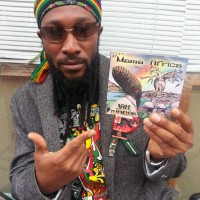 Jamaica and received his musical calling at an early age. At age 16 he received the Rastafari calling which he embraced, following the culture of Nyah Bingi gatherings, drumming, and cultural music.

NOTE
In 2007 Exodus was remastered and re-released for its 30th anniversary. The re-release sparked new interest in the album, which many now argue is one of Marley’s best works. Exodus has more tracks on Marley’s greatest hits album, Legend which is the highest selling reggae album of all time, than any of his other records.[1]