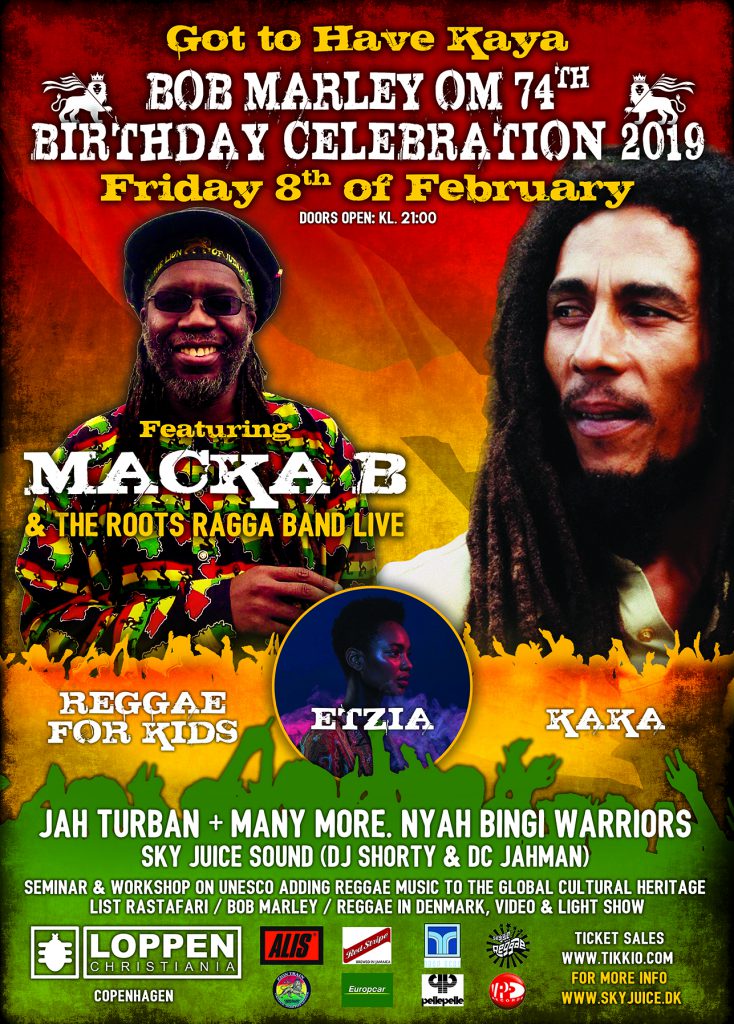 BOB MARLEY OM 74th Birthday Celebration – Got to have Kaya 2019

After concert Sky Juice Sound until you say when

Scroll down for press, photos & Videos

Sky Juice Promotions have been promoting Reggae music and Bob Marley Birthday in Denmark For over two decades. 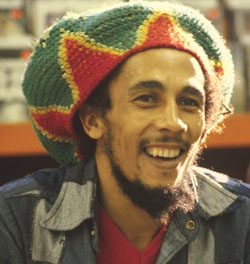 40 years since the release of Bob Marley’s ‘Kaya album’ which had songs like ’Sun is shining’ and ’Is this love’ inaddition to Marley life and music because many fans knows so little about what he really stood for.

Marley was born on the 6th February 1945, every year in February reggae fans all over the world celebrates The King Of reggae music birthday as a reminder of his work for peace, love and liberty. Songs such as “Jamming,” “Waiting in Vain,” “War,” and “One Love/People Get Ready,” has the message of Love, Peace and Social Justice, which has touched, uplifted and gave voice to the day-to-day struggles of so many people for irrespective of race, religion, status or gender around the world, even today.

Macka B has always been interested in music. At a very young age he was impressed by the heavyweight sound system Lord Barley, playing in the blues party next door. The vibrant reggae beat found a place in his heart that remains there to this very day.  Macka B has performed on Reggae Sunsplash, Sting & White River Reggae Bash in Jamaica.

Etzia: is currently finalizing her debut album “MOTIVATION ” that for the most part consists of reggae, dancehall, hip hop and electro, a sanctuary where genres are exceeded, creating the ultimate sound that satisfies Etzias vocal expression. 1st of February you will get a preview of the album when Etzia release her new single ”Let My Spirit Fly” from the upcoming album.

KAKA: Swahili for “brother”), is a reggae, dancehall and hip hop artist of Tanzanian descent. In 2007, Kaka had his debut appearing on stage with Natasja Saad on her last shows in Copenhagen before she died in Jamaica. Kaka later collaborated with Lirical D’Mirical and his sound system Splif Click also being part of the reggae underground scene in Denmark with Youngblood Sound.

Jah Turban: grew up in Spanish Town, At age 16 he received the Rastafari calling which he embraced, following the culture of Nyah Bingi gatherings, drumming, and cultural music. Since his arrival in Denmark, he has toured mainly in Denmark and Sweden, and France and Italy, and has participated in several of the reggae festivals in those countries.

The year to year Sound is one of the longest living sound in Scandinavia and continues to be realistically focused, with a very strong team of mature selectors who knows how to dip their hands in their record box come up with tunes you don’t hear everyday.