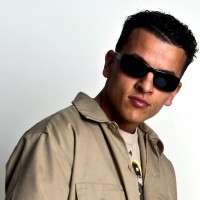 A versatile lyricist/actor. His innovative style is a variation of your conscious and dancehall style reggae and fast rapping, going in and out of soft, mellow and rough voice qualities.

Jonesey’s musical background is hip hop which he has been doing from early age with different groups (e.g. Blunted Buggz 02-07). He has worked in various genres and lately he started writing material for other artists too.

As he got to know the reggae culture through his close relations to a Caribbean family in Copenhagen the toasting seemed to come naturally to him. “I feel this music deeply in my soul” as he puts it himself.

Currently he is working on an album in Danish with producer Dj Turkman Souljah.

Up until now he has just 4 small scale releases behind him, but his raw talent and creativity means he continues to grow and makes him someone to watch in the future.