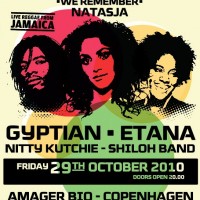 Natasja’s Fond has asked Sky Juice Promotions to make this music gathering to have the opportunity to give out two Prizes to reggae/offsprings with a donation of DKK 25.000 and for Upcoming/travelling artists a donation of DKK 15.000. 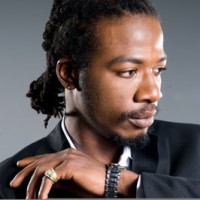 Nominated for the MTV award

GYPTIAN show in Paris was sold out – Great performance

So with this is mind,

Sky Juice Promotions remembers the queen of reggae/dancehall music in Denmark, with a live concert event. Featuring Gyptian, Ethana, and Nitty Kutchie live from Jamaica, plus many more. As a tribute to her work within the Danish reggae fraternity. Natasha was born on the 31st of October 1974. She had a true shining light around her, a kind and loving heart and a great music talent which has served as an inspiration for up and coming artists.

The reggae beat goes on and her music still lives on with an event called:

This event will be maad.

Check out some of the pre vibes for ‘We remember Tasha’ below.

Pharfar & guest artists: will feature performing artist from the Danish reggae stage which will reproduce some of little Tasha’s moments. (names tba)

Sky Juice Sound: Feat: Shorty DC. will play the people’s favourite Tasha’s songs and other reggae hit before and after the stage show.

Gyptian: The headliner for the night is the hottest Jamaican artist at the moment. Gyptian’s hold you is up for an MTV AWARDS, he is also nominated for the best Reggae artist at MOBO (UK) & SOUL TRAIN AWARDS (USA),  ” hold you has sold over 400.000 singles worldwide, just did a collaboration with Mary J Blige & Busta Rhyme, his show in Paris was sold out – Great performance, new single ” Nah let go ” added to HOT 97 (NY #1 Radio station) ” Hold you ” is the UK Top 50 this week. http://www.myspace.com/gyptian

Etana: Is the Jamaican soul sensation. With the same velvety richness in her voice as Jill Scott and Corinne Biley-Rae, she has one of the best voices in present day reggae. Etana describes her brand of music as reggae soul – “It is straight from the heart, straight from the soul, straight from the people and everyday life”. http://www.myspace.com/etanastrongone

Nitty Kutchie: Kutchie has been singing since his teenage years when he first began to step into the reggae dancehall scene, he started singing professionally in 1996 for the dancehall reggae group Scare Dem Crew. His motto is to prove to everyone his determination, dedication and loyalty to create great, positive music.http://www.myspace.com/nittykutchiehttp://nittykutchie.com/ 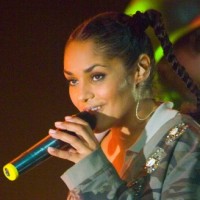 This event will remember the days when Tasha was with us, it will be exciting, live, informative and fullofniceness.So don’t miss this chance to be apart of ‘We Remember Natasha’ with a 100% satisfaction guaranteed.

He is a singer with difference in the music fraternity, his determination, is to sing good and positive music.

Stay in tune for updates.