ROCKY DAWUNI RELEASES NEW
ALBUM ON MARCH 31
“Performing his self-described ‘Afro-Roots’ sound, a fusion of reggae and Afrobeat
groove, few artists have a more positive vibe than Rocky. His show is an
incandescent Afro-Roots dance party.” – LA Weekly
“His influence has been widespread, working with Bono and Stevie Wonder while
his songs are consistently featured in popular American television shows. Rocky
is one of the rare African artists to break through to a broad audience.” –
Huffington Post
International music star and humanitarian activist Rocky Dawuni straddles the musical boundaries between Africa, the Caribbean and the
U.S. to create an appealing “Afro-Roots” sound that unites generations and cultures. Filled with uplifting and irresistible songs, Rocky’s sixth
album, and first on Cumbancha, blends inspirations from his diverse experiences while expanding on his identity as an artist, a proud son of

Africa and as a true world citizen. Cumbancha will release Branches of the Same Tree worldwide on March 31st, 2015.
Inspired by the soulful beats of Afrobeat legend Fela Kuti, the positive messages and deep grooves of Bob Marley and the infectious, singalong
anthems of Michael Franti, K’naan and Matisyahu, Rocky Dawuni’s songs blend elements of reggae, Afrobeat and global pop into an
enticing new sound. The songs on Branches of the Same Tree also reflect influences of New Orleans funk, Brazilian samba, even the lilting
sounds of Hawaiian ukulele, seamlessly integrated into a unique and approachable style. The album features appearances by an all-star
lineup of guest musicians, including veterans from Michael Franti and Spearhead, Steel Pulse, Ben Harper and The Innocent Criminals
and Ziggy Marley. Already a superstar in West Africa with a devoted international fan base, Branches of the Same Tree promises to bring
Rocky’s music to even wider audiences around the world.

Born in Ghana and based in Los Angeles, Rocky is a galvanizing performer whose infectious grooves and dance-inducing anthems have
consistently excited fans. Blessed with easy-going charisma, Rocky has performed and collaborated with Stevie Wonder, Peter Gabriel,
Bono, Jason Mraz, Janelle Monae and John Legend, among many others. Named one of Africa’s Top 10 global stars by CNN, he’s
showcased his talent around the world at major festivals and prestigious venues such as The Kennedy Center in Washington, D.C. and The
Hollywood Bowl in Los Angeles.
Rocky’s eloquence, cultural diplomacy and successful melding of music and activism have led him to become a passionate spokesperson
for various global causes. He has joined forces with Product (RED), UNICEF, the Carter Center and the UN Foundation. In 2012, Rocky was 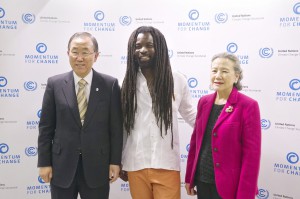 appointed the Tourism and Cultural Ambassador of Ghana and World Ambassador for the Musicians Union of Ghana. The same year, he was
named a United Nations Foundation Ambassador for the Global Alliance for Clean Cookstoves, alongside actress Julia Roberts and chef
José Andrés.
According to Rocky, “Branches of the Same Tree was inspired by the songs and melodies I have heard over the years during my travels. It
contains snippets of my personal observations of various cultures and global musical developments.” The album’s title reflects Rocky’s belief
that recognition of our shared humanity is the key to peaceful coexistence among all peoples of the world. “When we recognize we are all 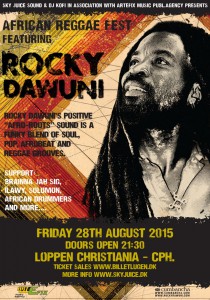 branches of the same tree we begin to see our common roots,” argues Rocky, “this is the cornerstone of true Oneness.”
The album’s first single, “African Thriller” was released on July 24th, 2014, followed by the launch of a music video on November 4th. Recorded
in Ghana and Los Angeles, the song features legendary trumpeter Osei Tutu (Hedzole, Edikanfo, Ebo Taylor), CC Frank on drums (Fela Kuti)
and Dean Gant (Anita Baker, Outkast) on keyboards. Jeremy Sole, a DJ, producer and host on the taste-defining Los Angeles radio station
KCRW, remixed the single and album versions of “African Thriller.” The video has been featured on hundreds of global outlets including
Entertainment Weekly, MTV, Channel O and VH1 and continues to gain momentum worldwide.
The album’s opening track, “Shine a Light,” is a catchy, radio-friendly anthem that incorporates a syncopated New Orleans-style rhythm,
Brazilian percussion, a reggae underpinning and a sing-along chorus. As with many of Rocky’s songs, the message is inspirational and
upbeat: “Light up the darkness / With a positive spirit / Oh let the sun shining in with a wave of a joyful sound / Whether high or low
I will not be afraid / To lift my head up reach and touch the sky / Hey, I believe we can / Shine a light so bright / For the world to see.”
Branches of the Same Tree also demonstrates Rocky’s more introspective talents with the ballads “Butterfly” and “Island Girl.” The former is a 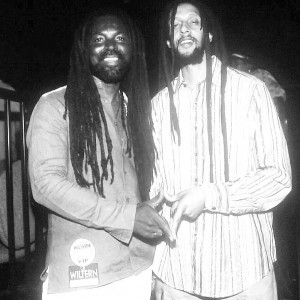 Bob Marley composition that was never formally recorded by the reggae legend. Rocky adapted this version from a rough Marley demo,
giving it a lilting tropical feel supported by long time Ben Harper collaborator Tom Freund on ukulele and Jack Johnson drummer Adam
Topol. The simple yet enchanting closing track “Island Girl” also features Tom Freund on ukulele.
The Bob Marley influence is also apparent on Rocky’s cover of the iconic Marley and Peter Tosh composition “Get Up, Stand Up.” Rocky gives
his version an Afrobeat touch and sings the lyrics in the Pidgin English vernacular of Ghana. Rocky’s commitment to political activism and
cultural pride is further demonstrated on the powerful song “Black Star,” which features a guest appearance by Samini, a rising star in
Ghana. “Black Star” celebrates Africa, calling for a new vision from the modern generation of Africans. It reaches for unity and strength
among Africans as well as anyone around the world who shares the belief that the roots of mankind can be found on the continent.” Rocky
sings out, “Remember who you are/ Remember where you are from/ Then you gonna know which way the wind will blow / Educate your
mind,

dedicate your heart/ That is the only way this victory will grow / Black Star arise show the people what you know.”
Rocky’s love of Africa and its people can also be felt on the song “Nairobi”, which was inspired by a trip he took to Kibera in Nairobi, Kenya
during a very tense time in the country. It was right before their national elections, and tribal and political differences threatened the
nation’s stability and security. Rocky wrote it as a love song for a city, country and people.
Other highlights on Branches of the Same Tree include “The Sign,” an Afro-Roots track that stresses the awareness of spirituality in our
everyday lives, learning to trust one’s inner voice and accepting that a higher power guides the course of our lives. “Children of Abraham” is
about recognizing shared destiny and choosing the path to peace over any path to war. “It was motivated by my trip to Israel and Palestine,”
notes Rocky, “that moved me deeply and led me to think hopefully about the possibilities of peace and coexistence. My interaction with the
people, and visits to mosques, churches and synagogues inspired the track.” 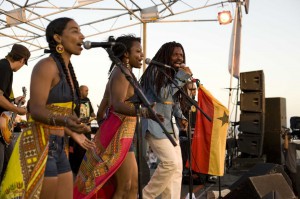 Rocky explores a variety of new sounds and musical direction on his new album, he does not abandon his reggae roots, contributing
two straight up African reggae tracks that will surely please his longtime fans. According to Rocky, “Rock Your Soul” is “a very personal song of love and relationships. 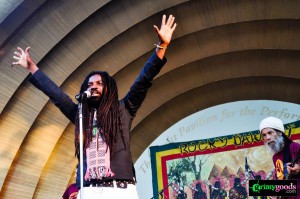 It’s about how we can transcend life’s challenges if love leads our intentions.” Meanwhile, “We Never Stop” is “a
track to put everyone on notice that roots rockers are back! We love to play music and the feeling of positivity and togetherness that it
brings.”
Reflecting his maturity as an artist, Branches of the Same Tree highlights Dawuni’s ability to communicate a universal, uplifting message that
crosses borders and reaches out to the hearts of millions.