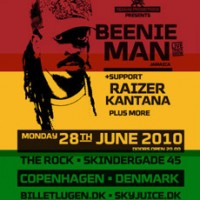 Beenie Man rightly proclaimed himself, King Of The Dancehall, a couple years ago and no one in the battle-based culture batted an eye-lash. Why? Because when it comes to chats and riddems, Beenie Man is the alpha and the omega. That is, the 33-year-old Kingston native, born Moses Davis, but better know ’round the world as Beenie Man, is the dancehall movement personified. Releasing his first record, “Too Fancy” at the tender age of 7-years-old in in ’81, Beenie has not only been at the forefront of the genre ever since, but has been largely responsible for growing it into the international phenomenon it is today. And it is exactly this legacy which his latest U.S. release, Undisputed, serves to maintain. “This album is all about the title,” he says.