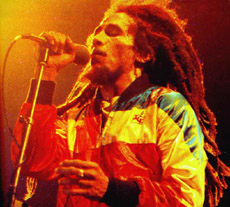 Sky Juice Promotion has thought long and hard about the staging of this year’s Bob Marley Birthday Celebration since we are in a situation this year, where we both have Bob Marley’s 66th Birthday celebration and also the 30 years memorial since Marley passed on (11 May 1981 to 2011).

As we unfortunately did not succeed in getting a setup which would match the quality and tradition of previous birthday celebrations, and also due to the high status of The King Of Reggae, we decided not to have two Bob Marley events within one year.

We will now embark on doing the more significant one of the two arrangements, namely the 30th Memorial, to be held in Copenhagen in May 2011. The 30 years Memorial is a very significant milestone in the reggae music calendar. So we intend to make this anniversary the best one ever of the Reggae King!

As we know how much love you have for reggae music, we will make up for the gap in this year birthday celebrations by staging a special event for you the fans, bringing you one of the hottest Jamaican reggae dancehall artists Mavado – in concert on 13 February at Vega.