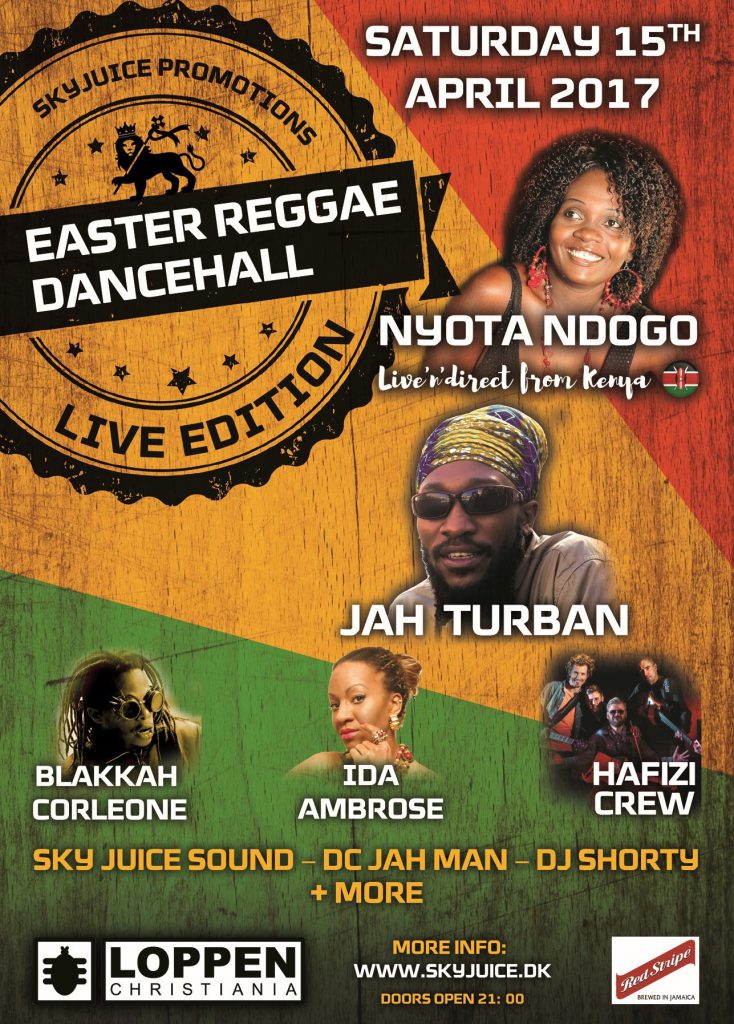 He grew up in Spanish Town, Jamaica and received his musical calling at an early age, singing on sound systems, at sixteen he received the Rastafari calling which he embraced, following the culture of Nyah Bingi gatherings, drumming, and cultural music. Since his arrival in Denmark, he has performed in Denmark, Sweden, France, Italy, Mexico, in 2012, he started a 3 month “Back to Africa” tour of The Gambia and Ghana with a return leg in 2014/15. His Album – Mama Africa – is possitively thunerable along with many great singles. Jah Turban´s aim and aspiration is to spread the positive message of his music worldwide. Jah Turban Facebook

influenced pop music. Nyota Ndogo is from the coastal city of Mombasa.  Her father Abdala Atib was a musician with a local band, but Nyota Ndogo did not take up musical career until being inspired by the hip hop group K-South‘s lyrics.She won Kisima Award for best Taarab singer in 2003 and Best female singer in 2005. She has three nominations for the upcoming 2008 Kisima Awards. She was nominated for the Best Kenyan female artiste at the 2007 PAM Awards.Her song Watu na Viatu was nominated for the best East African song at the 2007 Tanzania Music Awards.She also represented Kenya in Comoros. Nyota has also performed in Dubai, Germany, Mauritius and South Africa. Nyota ndogo Facebook

The year to year Sound is one of the longest living sound in Scandinavia and continues to be realistically focused, with a very strong team of mature selectors who knows how to dip their hands in their record box come up with tunes you don’t hear everyday. Sky Juice Sound single handily introduced “A real Jamaican style” of playing reggae music to Denmark and most of Scandinavia throughout the 90’s and beyond, no surprise that they became a reggae university and inspiration for most sounds and artists in and around Denmark today.