Jah Turban Live in Concert with the Donkey Sound Band with Pharfar and Fresh I, + Sky Juice Sound, Friday the 9-11-12, Forbrændingen,Vognporten 11, Albertslund

Jah Turban the sing/jay culture artist in the style of Junior Kelly and Lutan Fire, will be delivering a blazing track stage 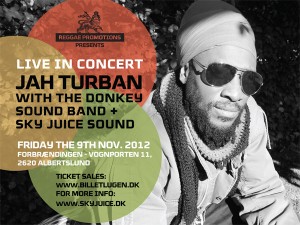 From the outside looking in, this has worked for him greatly within Denmark’s Reggae scene as Jah Turban has appeared on releases and riddims from some of the biggest Danish Reggae labels. Earlier this year, his big herbalist tune, Pass Me The Ganja was on the stacked

Alis Riddim from Juicy Halftone [which featured both Wendy Wonder and Karen Mukupa, as well as Jamaican veterans Mykal Rose and King Kong] and he’s also recorded for Danish labels such as Burton Records and evenFood Palace Music, the label responsible 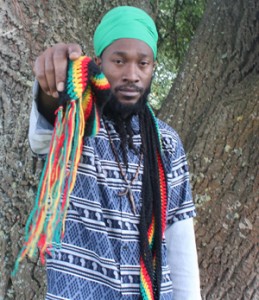 for the big Colliemonster Riddim, which featured the likes of Reggae and Dancehall superstars Sizzla Kalonji, Turbulence and even Vybz Kartel.Still, perhaps the biggest moment for Jah Turban has come via S.J.P. Records which
not only
birthed the hit tune Babylon Doom, but is also behind the project which is surely going to be introducing this fantastic artist to more and more fans
worldwide, his debut EP set, ’Africa Is Our Home’. The release features six very strong selections – Besides the title track and the aforementioned Babylon Doom, there is Mystic of Jah, Show Some Love, My Empress and the dazzling Move Vampire.
Jah turban mission is to uplift all people all over with songs of roots and culture, with a determined motivation towards equality and justice for all remember the poor ones.
Donkey Sound Band
Was Founded by Pharfar and Fresh I, for some years now and has be the backing band for most is not all the reggae 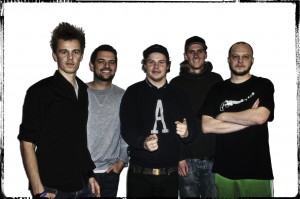 artists perfroming in Danish.
The Donkey Sound sound a part from backing Kaka, Wafande, Shaka Loveless, to name a few, the Donkey Sound band has also been backing international reggae artists like, Ziggi, General Levi, Million styles + more.
It is a band of all style , If  it is reggae or dancehall 100% niceness.