Mavado The Gully God from Jamaica + support, on the 13th February at Vega 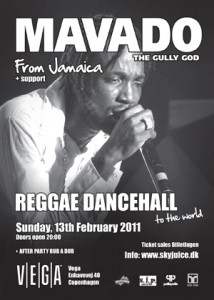 Reggae Dancehall To The World

Massive Massive for the first time in Denmark Reggae/Dancehall history you the people will be presented with the red hot artist of the moment who is ready to musically blaze up Copenhagen, with the original dancehall energy of Jamaica.

Reggae made hip hop and still today they are working together, with Mavado projects with Jay-Z, 50 cent, Wyclef + more.

Mavado
David Constantine Brooks (born c. 1981), better known by his stage name Mavado, or more recently “The Gully God”, the singer behind the eerie wails of “Anywayyy!” and “Gangsta for life!” and songs like ‘On The Rock’, ‘Money Changer’, ‘So Special’ to name a few, which have dominated the airwaves is a Jamaican dancehall artist.

He was raised in an area known as “Cuba”, a micro ghetto within the heart of Kingston, Jamaica’s Cassava Piece community. It was never easy for Mavado or his family, with his Grandmother often playing the maternal role. It was in the church that Mavado was first given a microphone to sing by his Granny at the age of 4. From then Mavado was a permanent fixture on every church function and rally.

His real break came in 2004 when he was introduced to talented production trio Daseca and recorded Real McKoy and has gone from strength to strength since. Mavado laced the Red Bull and Guiness riddim with the anthem “Wha Dem a Do?” and the momentum has shown no signs of slowing up, with follow ups like “Dreaming” and “Bawl dem a Bawl.”
Tragedy struck Mavado’s life last year when his Rastafarian Father, with whom he was very close, was murderedoverseas in Switzerland. After much haggling with the Swiss authorities, his Father’s body was sent to 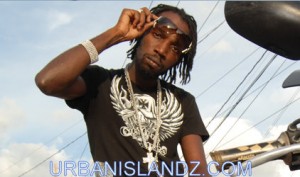 Jamaica early this year where he was laid to rest.

Growing up in the 90’s Movado experienced the boom of the dancehall era, and is now one of the Biggest most recognizable artist in the dancehall right now working with legendary Reggae producers Sly Dunbar & Robbie Shakespeare, Don Corleon and Delly Ranks.
So don’t miss this chance to see one of the biggest reggae dancehall artist right now.

keep reading
Mavado also crossing new boundaries. The dancehall luminary landed his single “Real McKoy” as the theme song for the fourth Grand Theft Auto trailer entitled “Everyone’s a Rat.” The hit song was also used in the Grand Theft Auto IV in-game radio station, Massive B Sound system. For the U.S presidential campaign, Mavado cleverly flipped his popular “On The Rock” to “We Need Barack” for tycoon Russell Simmons and Green Lantern’s official Barack Obama mixtape. According to the UK’s Guardian, Mavado’s tune was “the most interesting of the compilation’s contributors.” Mavado was also selected for a special Nike 2008 Olympics campaign, where Mavado made an exclusive track “On The Go (Faster Than Bullet)” for Olympic sprinter Asafa Powell’s Train for Speed, a 35-minute interval workout sold on I-Tunes which is coached by the track superstar over a reggae/dancehall soundtrack. Nike also created an exclusive custom sneaker for the dancehall star which represented his neighborhood Cassava Piece.

The newfound celebrity caught the attention of more mainstream media. Rolling Stone Magazine rated Mavado as the “Best Reggae Artist” in their Best of Rock April 2008 issue. Also Billboard Magazine noted the significance of his collaboration with hip hop mogul Jay-Z. “When Jay Z, who has never recorded on a reggae track, rhymed on a remix of singer Mavado’s current hit, On The Rock, it became arguably the greatest endorsement ever given to any dancehall record,” Pat Meschino stated in the article.

Mavado made dancehall an on-screen production in October 2008 when he took home his first major award for Best New Reggae Artist at the prestigious MOBO (Music of Black Origin) ceremony held annually in London.

At the top of 2009, the rising superstar unveils the second chapter of his stirring street narrative Mr Brooks…A Better Tomorrow on VP Records. The talented singjay has crafted his strongest album yet — a bittersweet struggle over the dichotomies in his world — past vs. present, good vs. evil, hope vs. despair, and freedom from strife. It is a true reflection of who Mavado (David Brooks) is today.

This sophomore installment of his latest hits and daring exploits are built on apocalyptic synthesizer progressions to which Mavado chats and sings simplistic yet profound lyrics with strong conviction and ease. His contagious hook and clever outlaw antics from the album’s first single “So Special” (produced by Linton “TJ” White) has already turned this #1 Jamaican and U.K. smash in into a U.S. commercial radio hit remaining on Billboard’s Top 100 Hot R&B/Hip Hop Airplay and Song chart for over a month (peaking at #52).

Mavado has gone from obscurity to ghetto super stardom with his enigmatic gangster façade. Part prophet, part superhero and part fugitive, Mavado is the voice of the streets and represents dancehall for the next generation.

Mavado The Gully God from Jamaica + support, on the 13th February at Vega was last modified: February 22nd, 2012 by fernando artigiano