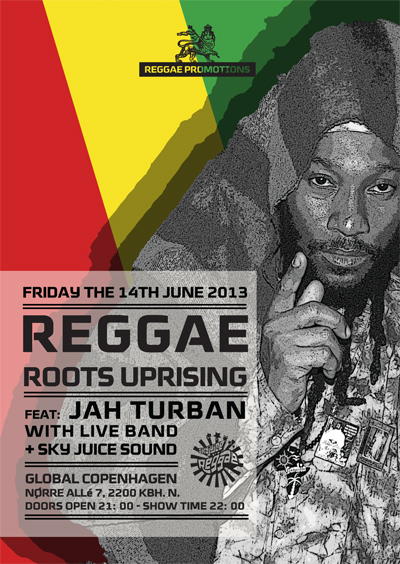 This event will be 100% energy roots vibration with Jah Turban and his live band + the year to year Sky Juice Sound bringing much joy to the massive,
bring your king and come swing, bring your Queen and leave your machine.

Jah Turban received his musical calling at an early age, and was inspired by many roots reggae artists which lead him at the age of 10 to start singing on sound systems in his area. At age 16 he received the Rastafari calling which he embraced, following the culture of Nyah Bingi gatherings, drumming, and cultural music.
Since his arrival in Denmark 2005, he took his musical talent to another level, recording with SJP Records – Sky Juice Promotions. Which lead the now inspired Jah Turban to tour around Europe, in countries like
Sweden, Hungary, Italy and France, to name a few.

In 2012 – 2013 the artist toured Gambia and Ghana delivering his message in the motherland.
While in Gambia he recorded a very popular song called ’Gambia’, a tribute to the smiling coast of Africa.
In addition another track was recorded in Ghana entitled ‘Fi we time now’ to be out soon,
Jah Turban´s aim and aspiration is to spread the positive message of his music worldwide.-