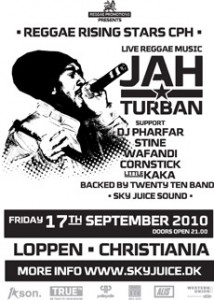 Jah Turban a sing/jay culture artist in the style of Junior Kelly and Lutan Fire, will show his true potential by delivering his first live stage show since the release of his new EP ‘Africa is our home’ with a message of upliftment. In support there will be some of the best uprising artists of Copenhagen back by twenty ten band and Dj Pharfar , line up – Stine, Jah Bobby, Cornstick , Kaka + Sky Juice Sound. On the 17th og September 2010 at Loppen Christiania doors 21:00. a togetherness not to be missed 100% niceness trust me.

Listen to ‘Praises to Jah by Jah Turban live at Loppen

[audio:http://skyjuice.dk/wp-content/uploads/2010/09/I-give-praises-to-Jah-by-Jah-Turban-Live-at-Loppen1.mp3|titles=I give praises to Jah – by Jah Turban Live at Loppen]

Stay in tune for updates soon

Also staring on this stage show

– I’ came in it became a real sound. Pahrfar and fresh i as music producers is producing a lot of records and at the moment they are producing a danish album with Stine kinck with the release of the single kom med mig- www.myspace.com/foodpalacemusic

Stine kinck – Is a Reggae, Pop and Soul artist at the moment she has a single out called ‘ Kom med mig’ which is played

all summer on p3 and p4 and the video has been aired on boogie.http://www.myspace.com/stinamusic 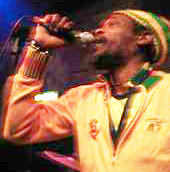 – The Veteran Jamaican singer entertainerknown as Jah Bobby started singing at age 8 but it was not until 12 years ago that he seriously made the right move to explore his musical talent. Jah bobby has a unique voice styling, which is compared to Skelly of Israel Vibration (who have played one of the best roots reggae concerts in Copenhagen)

Cornstick – Cornstick have been in the business for a long time now a true sufferer.

Born and grew up in Kingston and learned the music working in the Tuff Gong studio. Waiting on some brand new releases.  http://www.myspace.com/cornstick

Little Kaka – Up and coming star for the future.